Often when when we see great tasks and difficulties ahead of us we are afraid that is just to great a task to face. The person called and appointed by God to the task must face it head on. There is a great deal of work that needs to been for the upbuilding of the kingdom of God. The task may be large, but with God’s grace we can face the challenges that lie ahead.

Today we are looking at persons seemingly insignificant and without great abilities called by God to do great things. Whether a disciple, prophet or an apostle each has an astronomical tasks set before them. Although dismayed we can not be discouraged. Each of us from the least to the greatest have been called for a purpose and God is desiring to use us.

Let’s look at the call of Jonah. In the first chapter God calls Jonah:

When called by God Jonah’s initial reaction is fear. He attempts to flee from the Lord. He tried to run but the Lord remained with him and didn’t let go of him. The Lord made a storm so strong that out of fear Jonah instructed them to toss him into the see. This moved the men to have faith in God as the storm quieted. Even in our fear and attempts to flee the Lord, the Lord can still use us.

If like Jonah we find ourselves running we need to stop, and let the Lord be in control. We all have a great task ahead of us. The care of our families, the responsibility of maintaining our employment, the healing of the great divide in our nation and church and caring for our parish and those we serve. Instead of fleeing let’s turn to the God who loves us and created us to act on His behalf for His glory as we serve one another. The God of creation choses to use us to be His instruments for impacting others lives and bearing witness to the presence of His kingdom in our world. We truly have work to do. So often we’re caught up in our feelings and fear, that we literally walk away from serving God.

Even with our attitudes and our fears God steps in and calls us. Let’s look at the brothers in Today’s Gospel:

“Jesus said to them,
“Come after me, and I will make you fishers of men.”
Then they abandoned their nets and followed him.
He walked along a little farther
and saw James, the son of Zebedee, and his brother John.
They too were in a boat mending their nets.
Then he called them.”

In the Gospel of Mark, the evangelist gets right to the point. Jesus calls and they respond by abandoning everything to follow him. There is an important aspect to our invitation to respond to God’s call. The ability to Trust God. The abandoning of their nets and leaving their father and their boats indicates a radical decision to leave all things behind to embrace Christ’s calling.

Adoration after Mass Monday, Wednesday, Thursday, and Friday until 12pm.

We recommend masks be worn and If you feel sick and have a cough please stay at home.
Mascaras recomendado.
Si tienes toz o sientes mal queda en casa. 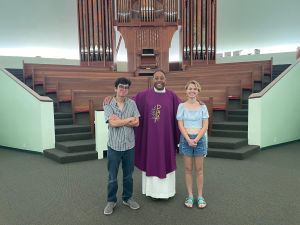 An article by Bishop Braxton: https://www.americamagazine.org/issue/moral-leadership-action